The 1967 motion picture 'The Dirty Dozen' was made into a weekly TV series in 1988. Shown in April 1988 on Fox Broadcasting, the Saturday-night series was "programmed opposite the smash hit 'The Golden Girls.'" Diane Hofsess of 'The Detroit News' acknowledged, "Its biggest ratings obstacles are Bea Arthur, Rue McClanahan and the other 'Golden Girls' on NBC." Ben Murphy believed, "It's the toughest show in television today (back in 1988)."

Shot on location in Zagreb, the former Yugoslavia, Ben Murphy told Patricia Brennan of 'The Washington Post', "It's a 12-day shoot of action, in a foreign location, without the luxuries of home, and we're doing a 6-day week. So it's time-consuming. I haven't had that much time off. I spent one day reading for 6 hours, and I used it to try to space out for a while."

Filming of the 13 episodes including a 2-hour pilot movie began in January 1988. 'United Press International' reported at the time, "It is the first major TV series ever shot in its entirety in an Eastern Bloc nation with (the former) Yugoslavia's diverse scenery doubling for France, Italy, Germany, a Scottish island, and such cities as London and Brussels. (The former) Yugoslavia was chosen for several reasons. The country is one of the few places in the world that still looks like Europe circa 1944. Also, the dollar goes further in (the former) Yugoslavia than in other European countries."

Ted Shackelford of 'Knots Landing' played the German spy Helmut Pendl in one episode. Ben told Patricia he knew "just 'good morning' and 'good night' (in the local tongue)." Ben also stated, "The only thing I know about the people is from rubbing shoulders with them in the work place. We have a mostly Yugoslavian crew with some British. The Yugoslavian actors are marvelous and we have some of the best trained stage actors out of Europe here. The Yugoslavs are not at all embarrassed or intimidated. They go out of their way to talk to you.

"All our guest stars are British, German and Yugoslavian, character actors from London and Munich - character actors are the same the world over. The Yugoslav stuntmen are marvelous. We had a story about Cossacks, and none of us can ride and we were forced to be on horseback. These Yugoslavians were falling off horses all day long. We use a lot of local actors to play German roles and Yugoslav roles."

Dan Gordon recounted, "We interviewed more than 100 young actors for the 6 lead parts and I can't remember when a cast blended together so well. We've made the series a little lighter than the original. And we changed the crimes for which the men were imprisoned to make them less atrocious. No murderers or rapists. And each man is a specialist - marksman, forger, demolition expert, linguist, and so on."

Ben recalled, "Usually they (the producers) send the scripts out to all the writers, and they (the scripts) come back sort of generic. Unfortunately we're just creating it as we go along, adding our own things. The writers wrote very optimistic scripts that could only be done in Hollywood by Steven Spielberg, and we have to try to do it here. John Furia really has his hands full.

"It's an adventure. The first episode, we lost 5 of our members in our first raid. Then we added one more member. Originally they wanted to kill guys off that people began to love but Glenn Withrow (as Roy Beaubuff) has been extended and extended. He's very cute - interesting-cute - and they keep extending him. I guess Fox figures this would appeal to children. Actually the Yugoslavs are very blasé about filmmaking, but children here will line up to watch it."

Dan maintained, "Because of the scenery and great locations afforded by (the former) Yugoslavia, this series looks more like a feature film or a mini-series than a series. We couldn't shoot an ambitious project like this in Hollywood or in Western European countries because it would be too expensive. Before we started the project, I saw all 3 of the TV movies ('The Next Mission' 1985; 'The Deadly Mission' 1986; 'The Final Mission' 1988) and the original film and our quality doesn't fall off a bit."

Ben told Sylvia Lawler of 'The Morning Call' in May 1988, "Now that it's spring it's easier, but winter was tough. And it's tough being away from home. I don't have to pretend I'm acting because the reality here is not always a lot of fun and that is what I use in my work. I work at the technical part of the craft but the emotional part … that's built in with the conditions here. Time doesn't weigh heavily here because I'm working all the time ... It rains a lot here in spring."

Ben said he hoped that what viewers would remember about the series was "the people we use and the richness of our backgrounds. I only hope that World War II will be a popular subject matter. The look of it, and the countryside here, are fairly realistic. The storylines are all brand new, totally different stuff that bears no resemblance to any of the others … Theirs are all brand new characters, not quite as colorful as the others … as the Telly Savalases and John Cassaveteses and Jim Browns. Our actors are more middle of the road, more leading men than colorful bruisers. Telly and Cassavetes were diverse personalities, both in their physical and psychological make-up."

Of casting, Ben made known, "I had auditioned for 'HeartBeat' before this one but didn't get it and then this came along. I had literally 48 hours notice before I read for the network. But I think the right role found me. I feel good in it. Not all the time, of course." On reflection, Ben remarked, "I don't want to say anything negative but I want to be honest with you, too. I felt when I saw this (competing against 'The Golden Girls') coming that if it only went 13 weeks on Fox, fine. I needed a job. But if it went more, okay, too. Fox pays me well and they treat me well. They pay these young guys well, too. I remember making $450 a week on 'Alias Smith and Jones' (1971-73), and these guys are making 20 times that for a first-time series. But they're good guys, well trained, half out of New York, half out of L.A., one from Juilliard."

Back in 1983, Ben could also be seen in the TV mini-series 'The Winds of War'. However he did not appear in the 1988 mini-series, 'War and Remembrance.' Ben elaborated, "(Originally) the role (Warren Henry) was cast with another actor. He was too young and I was his replacement. So came 'War and Remembrance' and they replaced all the (Henry) kids, Ali MacGraw with Jane Seymour and Jan-Michael Vincent with Hart Bochner.

"By last January (1988) I had not heard from (director) Dan Curtis in a year, but I got a call from his gravelly voice saying 'I got a problem. Come on in and let me see how old you look.' They had cast Michael Woods in my role but he wanted out to do something else ('Private Eye'). So I did the test and they offered me the role. We could have gotten away with it, but I thought I was almost too old. I said no. I really wanted to be available for another pilot ('HeartBeat'). I didn't get it, but that's what I wanted. But if I'd done it, I would have replaced myself, which is kind of unique. Anyway, Warren's role in 'War and Remembrance' was very small. He dies very early in it." 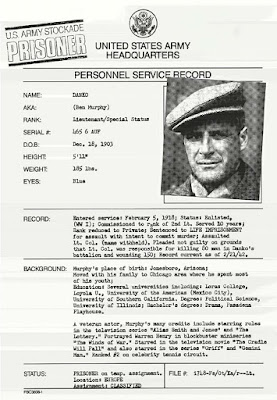 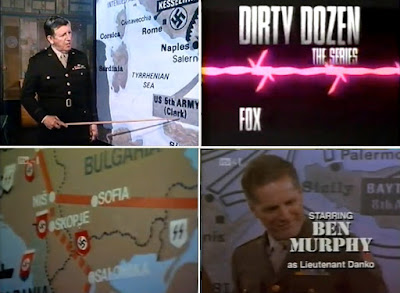